I’m really excited to be giving some talks about my PhD research and upcoming collaborative projects over the next few months. Here are the details:

Historically, sex work has largely been constructed as a deviant and disorderly presence in the city.  Much of the research on sex work has therefore centred on its marginalisation to ‘dark corners’ (Hubbard 2004) of the city, and the multi-faceted stigmatisation that sex workers face.  However, as this presentation will argue, there is a need to consider other roles of the sex industry in everyday urban worlds; a need for exploration of its intersections with art, aesthetics and affect, rather than the purely legal or moral concerns which have dominated discussions to date (Agustin 2007).

Drawing on a case study on the impacts of brothels on residential communities in Blackpool (UK), this talk advocates that there is value in bringing together ideas from the urban studies literature on sensory urbanism with those from the visual criminology literature.  The presentation focuses on the physical appearance of the brothels and how they are perceived by members of the local community. Key aspects highlighted in resident narratives were the appearance and transparency of the windows and doors of the brothels, the visibility of their security measures, and the role of colour and light in their appearance. The case study demonstrates that, in order to holistically understand illicit places in the city – and the multiple roles they play in everyday urban worlds – it is vital to relate the visual to other senses; and, furthermore, to capture the relationship between the senses and emotion.

Sex Work in the Community: A Study of Blackpool’s Brothels 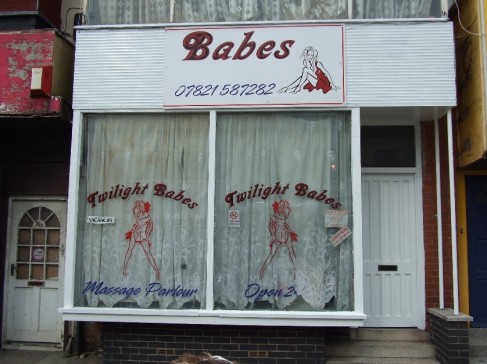 Sex work, in all its forms, is generally considered to be a problematic feature of urban areas.  Such perceptions include associations with dirt and disorder, questions about sexual morality and the reputation of the surrounding areas, and fears concerning trafficking and other crime.  However, robust and inclusive consultations with residential communities about the real (as opposed to perceived) effects of sex work remain limited.

This talk will therefore shed some light on this under-researched area, discussing the findings from a doctoral research project (conducted between 2011-2013) on the effects of brothels in Blackpool on the surrounding residential communities.  Drawing from observations, and interviews with local residents, police officers, Blackpool Council, and sex workers, the talk will provide an insight into how brothels in Blackpool are managed by local authorities and present their very complex role in the everyday lives of their neighbours.  Contrary to the assumption that crime and disorder are the only aspects that brothels bring to residential areas, the brothels and sex workers have many roles in Blackpool’s community life.  These include economic contributions, heightening feelings of safety and community spirit, social entertainment, and, quite simply, just being other ‘ordinary neighbours’.

On-street, Off-street, And Online: The Dynamic Liminalities Of Sex Work

Sex work has long been the subject of labelling/stigma with sex workers being the subjects of moral authority.  Relatedly, the physical spaces in which sex work is produced/consumed have been subject to ‘territorial stigmatization’ (Wacquant, 2007). That is, commercial sex spaces have been marginalised – physically, socially and economically – by framing them, and those that occupy them, as abnormal, immoral, deviant, dirty, disorderly, and dangerous.  Sex work spaces are thus constructed as major ‘blemishes’ on the urban landscape and the very fabric of society. Simultaneously, however, sex spaces constitute ‘counter-spaces’ where ‘sexual boundary crossers (Hausbeck Korgan, 2016) can engage in transgressive behaviours and express their minority sexual identity status.  Sex work spaces are also liminal in that they are often caught between the grey space of legality and illegality; ‘a space between sex and work whilst also being neither/both’ (Smith, 2015); a space that can be simultaneously physical and virtual; a space where different personas can be portrayed; and, a space where fantasy meets reality. This exploratory, conceptual paper considers the key liminal characteristics across three distinct spaces where sex work is produced/consumed: (i) the street; (ii) indoor spaces (e.g. brothels, hotels); and (iii) virtual spaces (e.g. online escorting; social media and camming).  It is argued that the moral posturing, stigma and regulations imposed upon sex workers gives rise to the exercise of ‘liminal stigmatisation’. Simultaneously, however, the very liminality of sex work spaces, especially virtual ones, allows sex workers to mobilise and challenge this liminal stigma.

Beginning in the academic year 2016-2017, the Criminal Justice Partnership are starting a postgraduate criminal justice seminar series.  These events will provide a great opportunity for doctoral students to present their research in an informal setting to a varied audience (including School postgraduate students/colleagues, the wider University community and external guests) while also acting as a socialising and networking space.  The series is open to ALL students conducting research on, or of interest to, criminal justice, criminology and policing. The presentation formats and topics will vary and speakers are free to present at all stages of their research, covering any element of their research interests.  Suggestions for external speakers are always welcome and a timetable of events for the upcoming year will be produced.  Below are the details for event one:

Are you currently doing a PhD or Masters dissertation on topics within Criminal Justice, Criminology or Policing? Fancy an opportunity to present about your research, gain some valuable feedback, and network? Submit an abstract to the Postgraduate Christmas Conference!

Presentations will be 15 minutes long.  We will be joined by Prof. Stuart Kirby to do a closing chair discussion, and there will be opportunities to ask questions of your peers and share tales about the research process.

The event will be accompanied by mulled wine and appropriately-Christmassy cakes/nibbles, and we will head for a meal (optional) in the city after the event.  Students at ALL stages of their research are welcome to submit an abstract and the event is open to all.